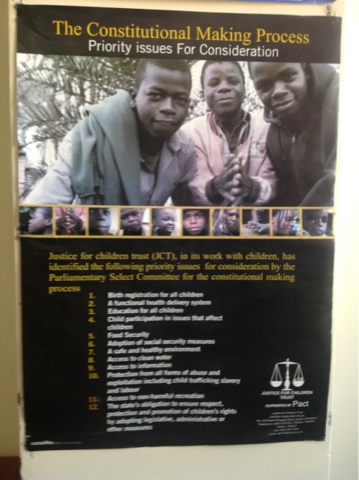 This poster appeared on my iPad this morning - quite randomly (shuffle). But it seemed very appropriate.

Zimbabwe was so transformed by the last constitutional debate, it seems right to hope that the same might be true this time, but instead the water is rather muddier.

In 1996 when Jonah Gokova and I ran the first workshop on Zimbabwe's constitution - including presentations by Bulelani Ngcuka from South Africa and the late, much missed, John Makumbe, we were amazed at the excitement it generated. The room was packed out and debate was lively. Even at that early stage, people seemed to sense the potential of the constitution as a framework for debate and reform.

The seeds that became the NCA were already germinating at the Zimbabwe Council of Churches in the minds of Deprose Muchena and Tawanda Mutasah, but I don't think even they anticipated what was to come - a profound transformation of party politics and civil society in Zimbabwe.

I'll post about the images and significance of those debates another time. Today is a day to focus on the hopes that Zimbabwe continues that transformation, and that the outcome is progressive and democratic. So much could be riding on this. 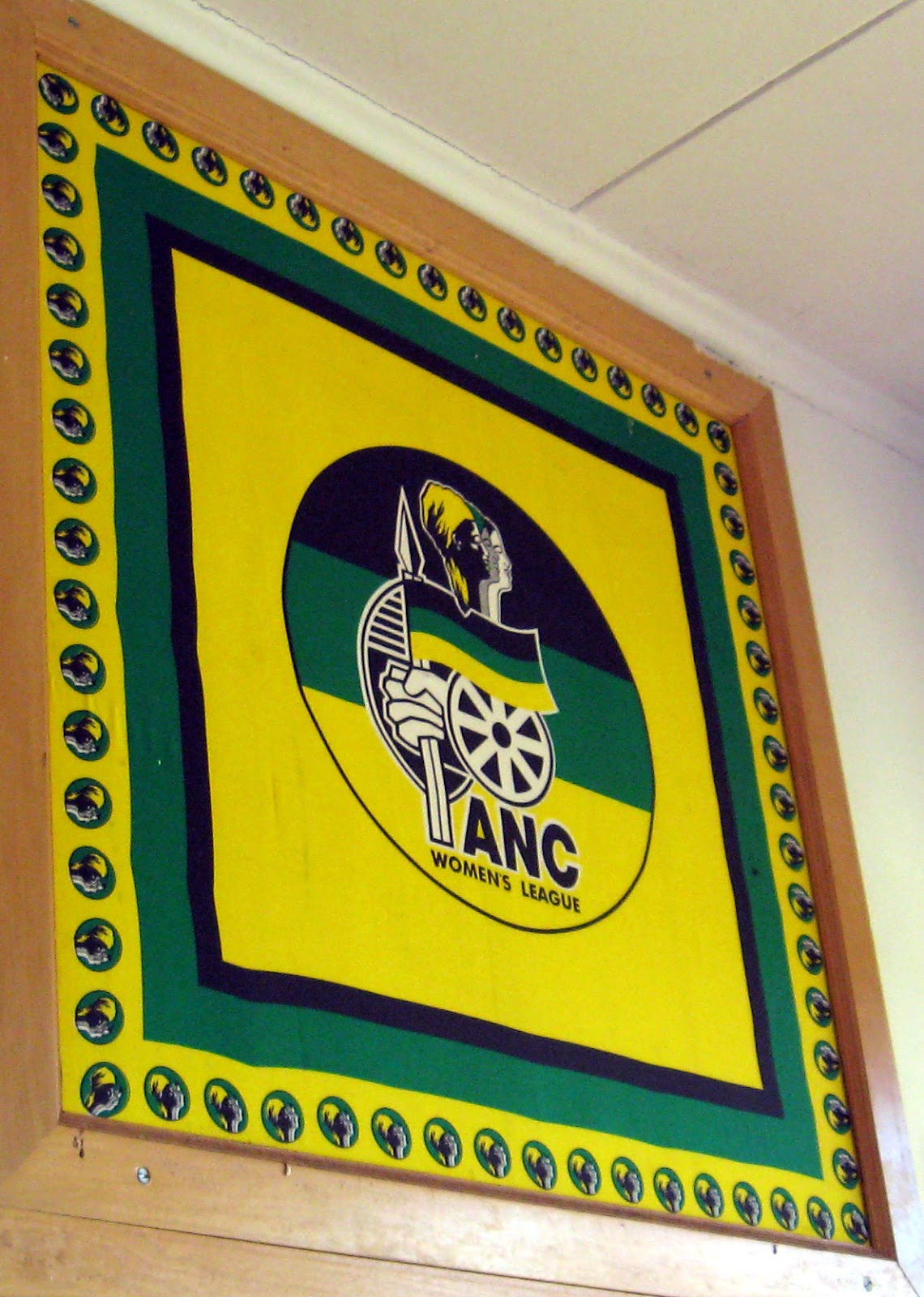 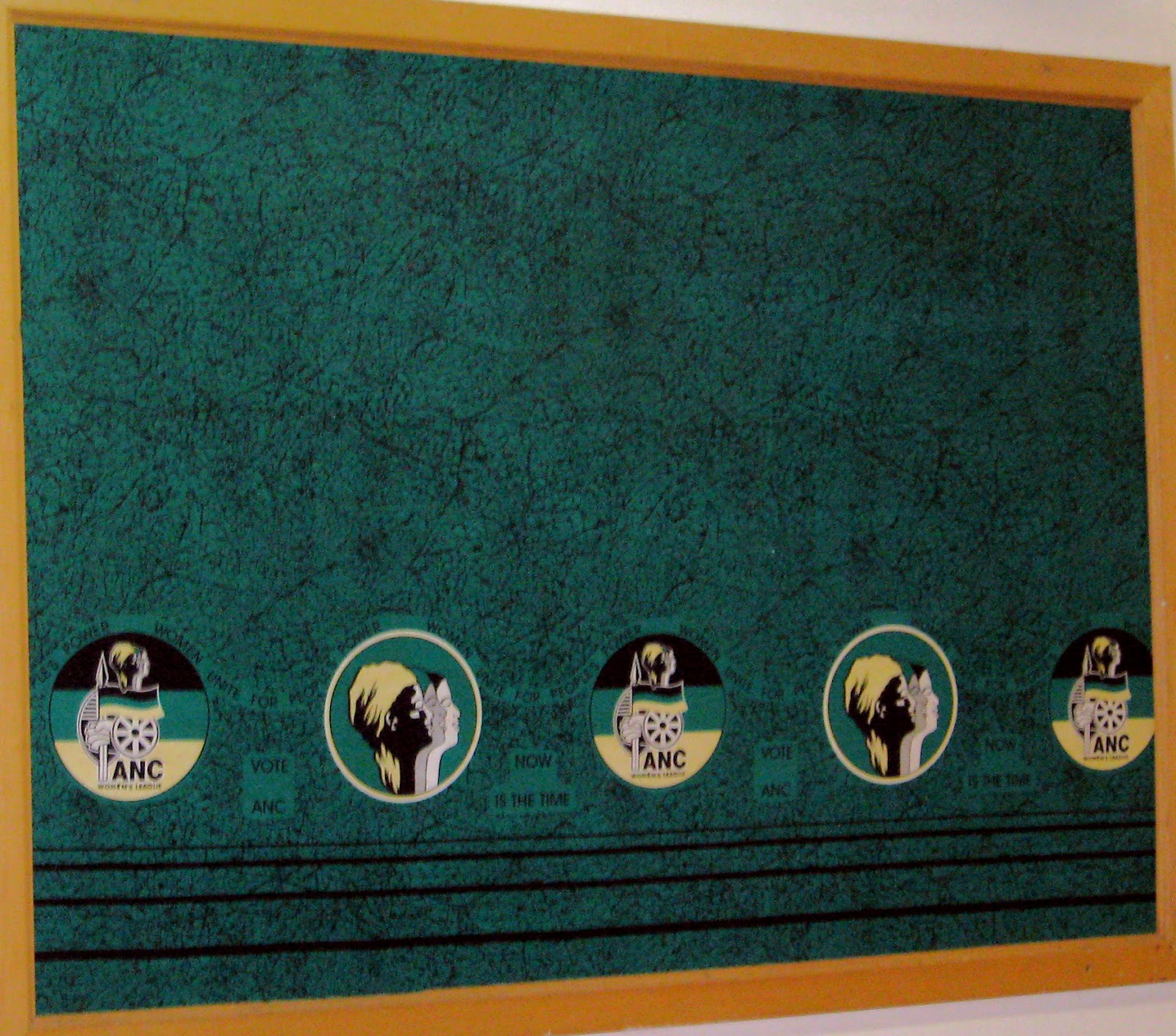 Commemorative fabrics are not a huge thing in the parts of Africa
that I know best.  In Zimbabwe, you sometimes see Church anniversaries marked with fabric, especially the women's guilds. But other fabrics are fairly uncommon (although this may be changing?).

I've always been envious of colleagues from Tanzania and Mozambique who seem to find dozens of very political fabrics.  I'm very much looking forward to some posts from my colleagues who study Tanzania!

The fabrics above actually show ANC slogans and logos, but were photographed by Dan Hammett in Mbeya, Tanzania, when he went in search of the Solomon Mahlangu Freedom College (SOMAFCO), which is now the Tanzanian national agricultural college.  They're not terribly exciting images, but they do remind us about the solidarity ties between South Africa and Tanzania, which continue to shape continental politics today.

The real reason I was thinking about fabric though, is that this morning a post on h-africa  flagged up this new digital archive of Images of African Commemorative Fabrics at the University of Wisconsin  and I thought some of you folks out there would be interested to know about it.  Enjoy!


This blog grew out of my fascination with political ephemera -- t-shirts, posters, pamphlet and graffiti -- from the post-colonial period in Africa, but also out of a real concern for its preservation.  While there are archives of colonial-era material and growing digital collections of anti-apartheid material, less attention has been paid to the material culture of post-colonial political movements.  Yet historians are increasingly researching the post-colonial, and we're seeing a 'cultural turn' of African political scientists on both sides of the Atlantic.

But what sources do they use to conduct this research?  And will those sources still exist in 30 years time?

Political reform movements, NGO campaigns, and exhortation aimed at voters, drinkers, and those at risk of contracting the AIDS virus to change their behaviour have all contributed to shaping Africa's public sphere.

The material culture of these movements is ephemeral – posters, pamphlets, and t-shirts are rapidly consumed, but rarely preserved, despite it having much to tell us much about its producers and intended recipients.

I'm hoping that this blog will contribute to protecting and preserving some of this material, with a view to enabling contemporary researchers, future historians, and the interested public to gain a richer and more diverse understanding of Africa’s public life than that often portrayed on screens and newspapers in the West.

In much the same way as explorers, colonial officials and missionaries brought back items of cultural and historical worth, which became part of the museum collections in the , so new generations of activists, VSO co-operants and researchers have brought back small but significant pieces of African political history - sometimes in their wardrobes, but increasingly on data sticks, camera memories, and mobilephones.

Although not ‘looted’ in the fashion of previous generations, the T-shirts, pamphlets and posters of contemporary Africa need to be preserved and made accessible to students, researchers and the wider public in Africa and elsewhere.  In this way, the work of political activists can receive recognition and be celebrated for its creativity, humour and incisiveness, while also contributing to scholars' understanding of the period.

So, my hope is to encourage more thinking about the preservation of these materials - whether digitally or through more formal archives -- but also to think about how we use images and cultural materials to deepen our understanding and our research.

Many thanks to Dan Hammett for the t-shirt and image.
Posted by Sara Dorman at 06:48 No comments: 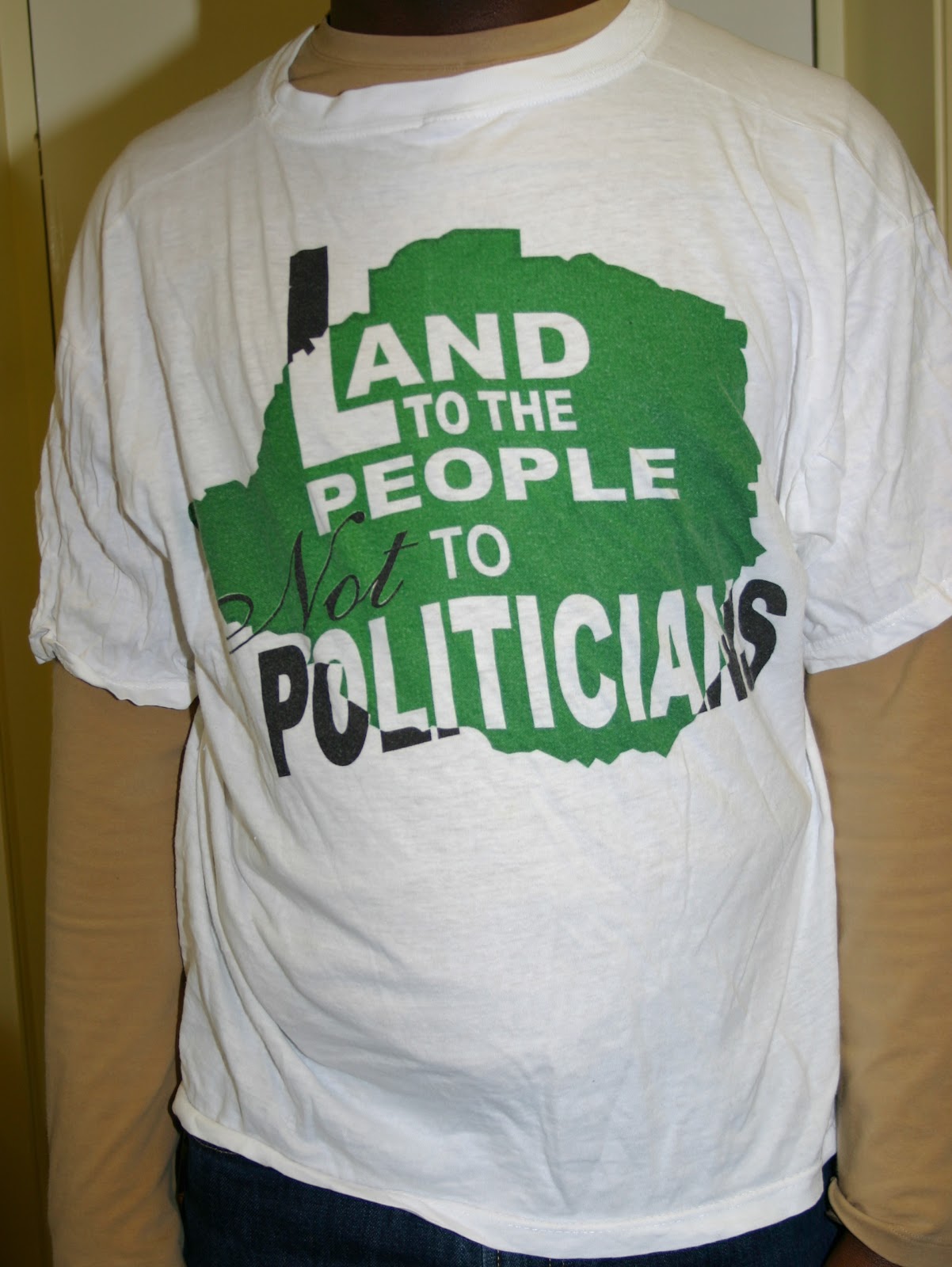 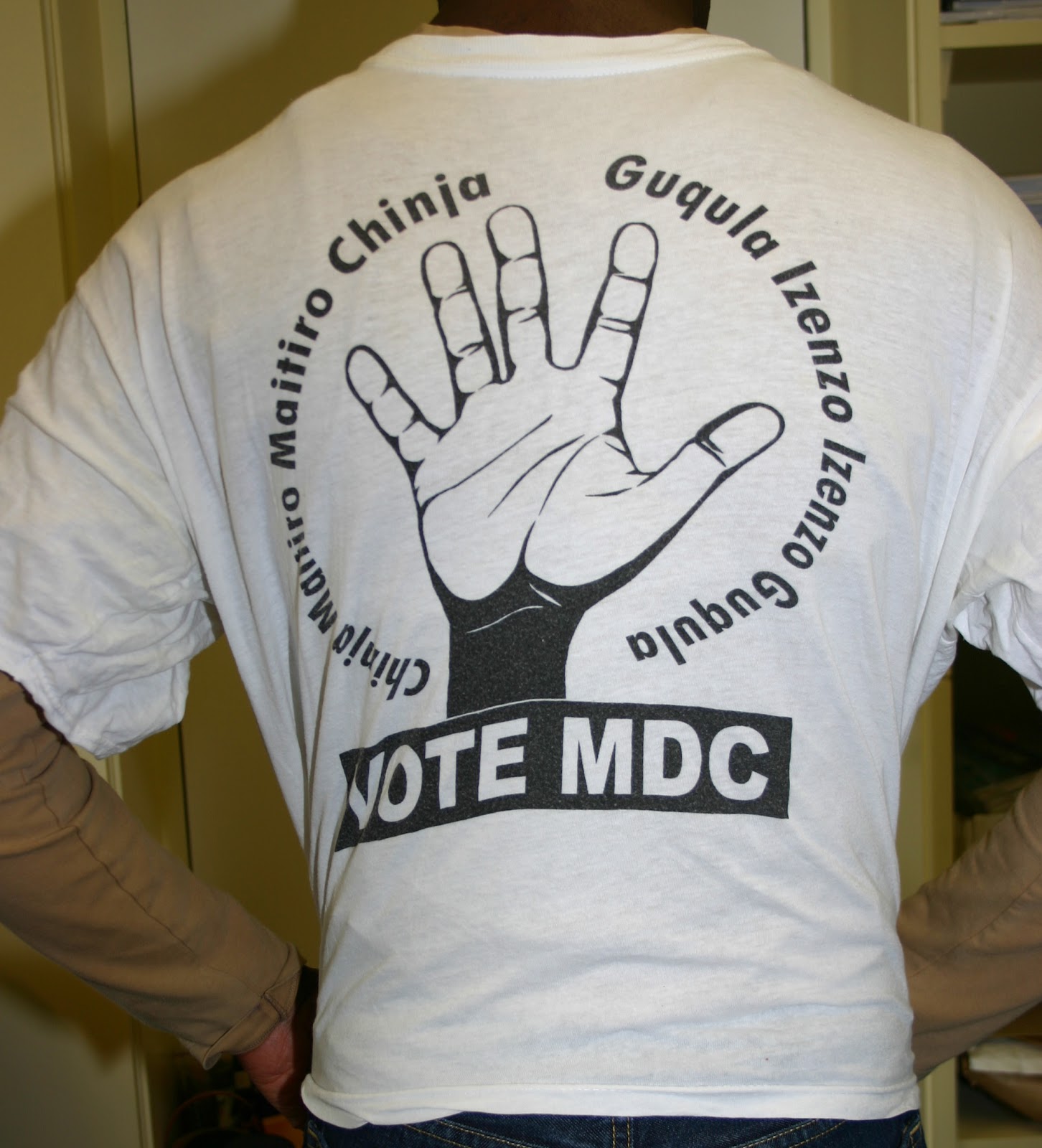 Twitter's going nuts about Ian Smith's farm being seized.  This is news?  Really? Compared to what is going on in the DRC?  Or South Africa's latest revelations?  I don't think so.

That said, Mugabe has played land masterfully, from ignoring it as a political issue throughout the 1980s, to stirring it up little by little in the 1990s (while relying on  his commercial farmer buddies who supported ZANU in a multitude of ways), and finally exploiting it to the utmost when the cupboard was bare after 1997.

Sadly, the MDC has never effectively countered this emotive and effective discourse, much less the reality of land redistribution.  The t-shirt above was, I think, quite an effective attempt to reframe the land debate, but it never really caught on.

And, while we know that lots of land did go to the politicians, research by scholars in Zimbabwe and elsewhere (including students at Edinburgh),  suggests that the story is more complicated than that.

The land debate in Zimbabwe should not be about this sort of political gimmickry that we've seen today, but over and over again, the media falls for these tricks.

These pictures were taken by the ever industrious Dan Hammett, who also produced an excel spreadsheet that I will be mining for details in coming blogposts. I believe the model wished to stay anonymous.
Posted by Sara Dorman at 07:53 No comments:

"Some people are afraid of an election."

Newsday Zimbabwe  is reporting Mugabe's speech from the ZANU(PF) Conference: "Some people are afraid of an election.".   Not surprising.

These posters from 2008 give a sense of the tone of debate, and why indeed many people are afraid of an election.

This 'classic' poster to the right is from the original March election and very much resembles posters from pre-2000 elections.


But I wondered if the two below were from the run-off election that was held in June.

They were all taken in April.  Anyone recall if this 'generational' approach is right?

The posters here were all photographed by Busani Mpofu, who was doing fieldwork for his PhD in History at Edinburgh, but who kindly agreed  to 'feed' my curiosity about election ephemera.
Posted by Sara Dorman at 04:44 No comments: 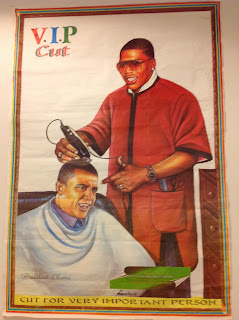 For some reason this picture hangs in the staff loo at work.  I had it in mind for a blogpost today because I thought it was from Ghana - and today is election day in Ghana.  At the last election, Lindsay Whitfield argued that there were a lot of similarities with the US elections that had preceded them.  I'm wondering if that argument holds this time too?  I was intrigued to hear some radio coverage suggesting that Ghana's new oil production had changed the terms of the debate and that policy (i.e how to spend the oil money) had taken a greater place than previously.  Mats Utas' blog emphasizes party loyalties rather than policy debates though. And this blogpost from African Arguments also questions that suggestion.

Oh, and the poster? A close look reveals that it's from Nigeria.  A lesson there for always checking the source (more on this in future blogs).


Edit:  And right on cue here's a blog calling Akuffo-Addo the Mitt Romney of the campaign! I'm not sure that's fair, or even a useful comparison.  But I totally agree with the blogger on the interesting aspects of An African Election, the film about the 2008 election.
Posted by Sara Dorman at 02:06 No comments:

Where it all began... 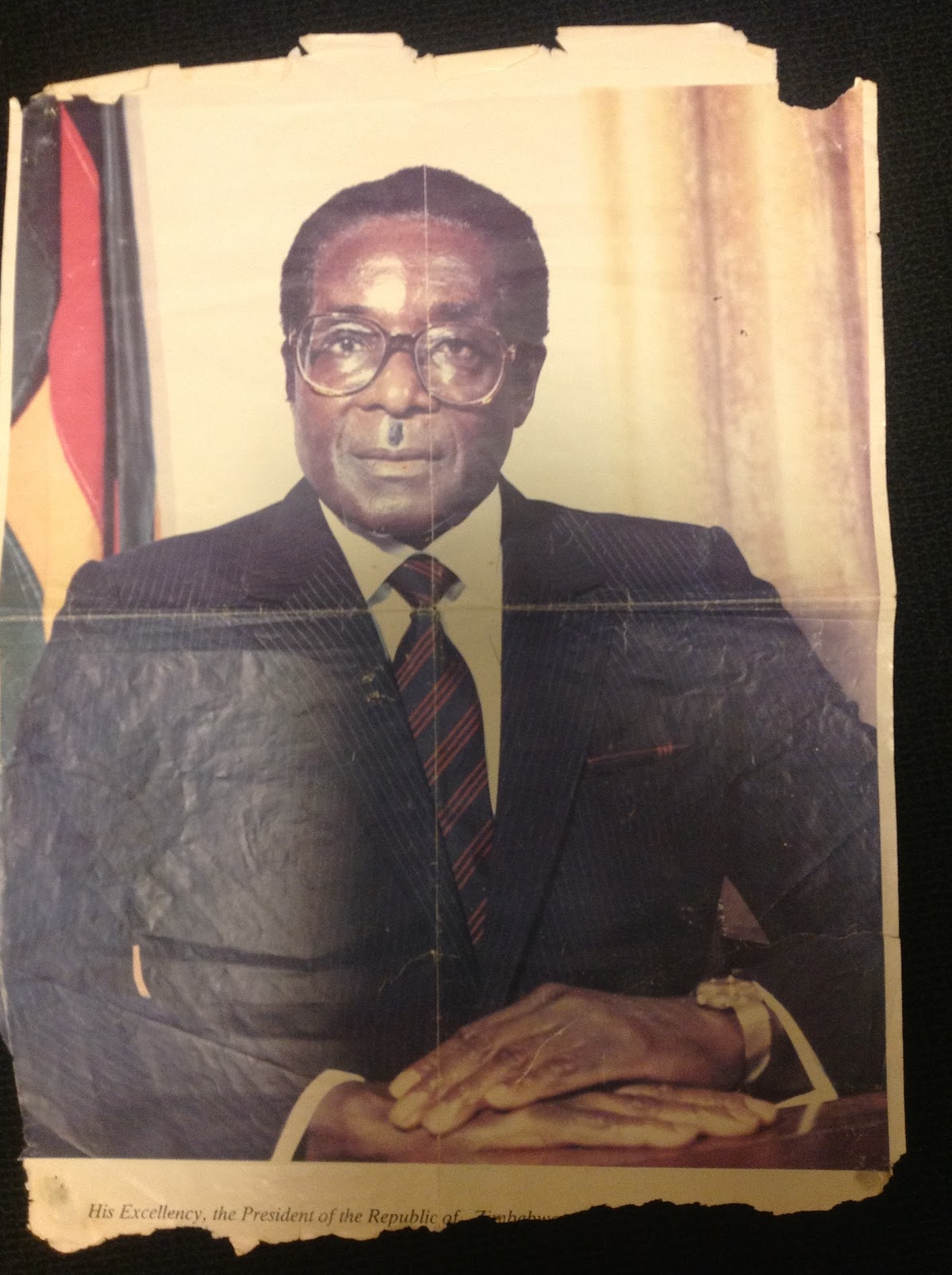 This poster was 'collected' on one of my first trips to Zimbabwe.  I had to have a copy of it. It was so iconic. We saw it everywhere.

Yet at the same time, Zimbabwe didn't fall into the 'standard' account of being run by some crazed dictator.  Like the picture itself, Zimbabwe and Zimbabwean politics continue to prove enigmatic to me.

And my fascination with the images which are used to represent the nation, by politicians and 'civil society', has also continued.

Buoyed by a session on academic blogging, I've decided that my much mooted project on post-colonial political ephemera will take shape as a blog.  I'll be posting up some of my favourite images, discussing what they tell us, and hopefully inspiring some of you to send me your own images.  Please let me know what you think.